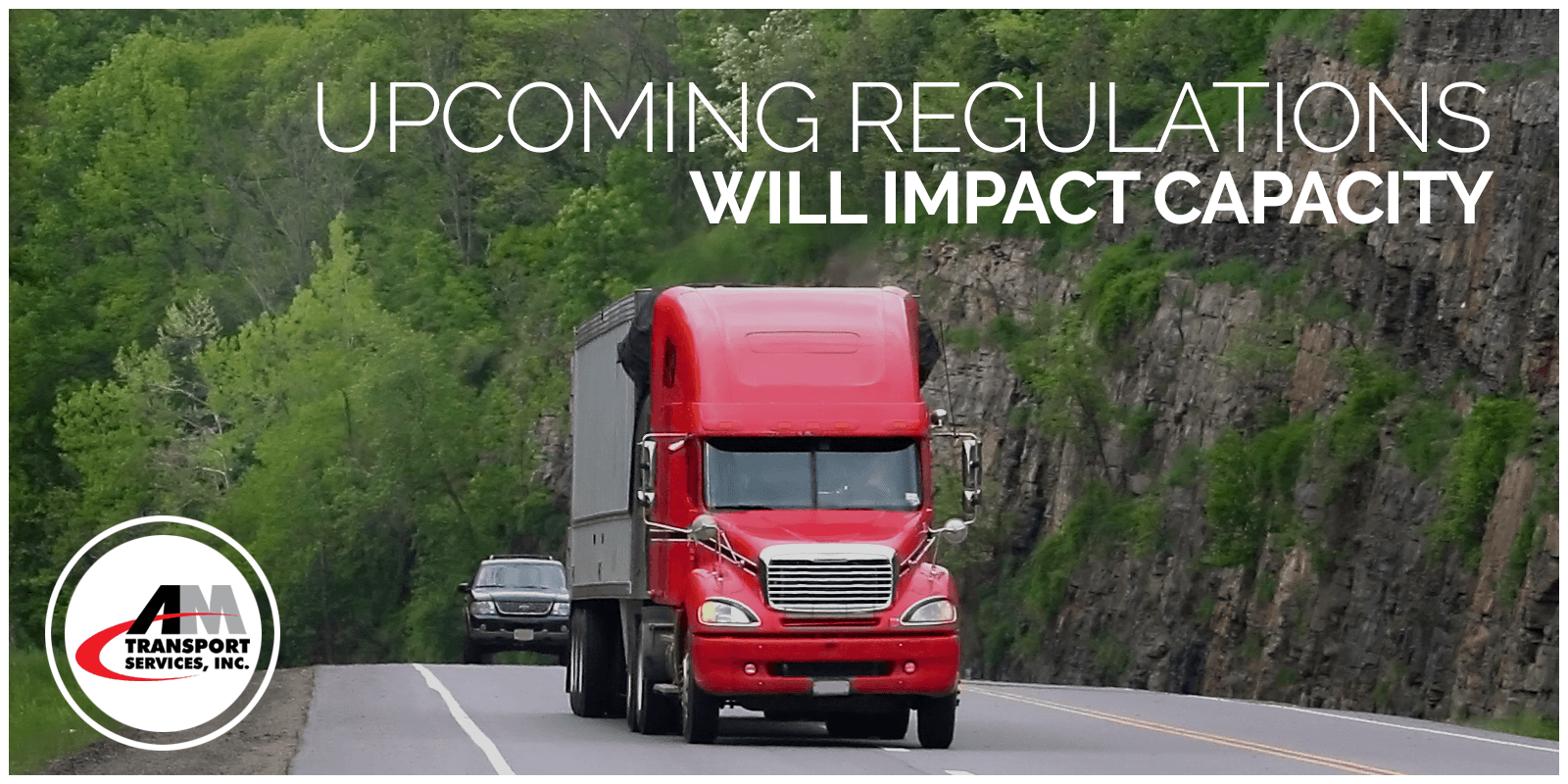 Upcoming Regulations and a Tightening Market

Shippers are pretty happy these days. Capacity has loosened up and this gives them a little bargaining power. It’s understandable, but perhaps shortsighted to start chasing after the lowest possible rates instead of working to build strong relationships with brokers and carriers who offer consistency and reliability.

Here’s the thing, anyone who works in an industry as highly regulated as transportation understands that new rules and regulations are imposed at a pretty steady clip. But often, shippers aren’t familiar with the depth and variety of these regulations and their impact on capacity.

We recently experienced this with the roll-out of the ELD-rule last year. Most of our customers had questions, but didn’t understand the long-term implications and the far-ranging effect of the mandate on carrier availability. This was exacerbated by the mandate’s two enforcement dates–with a soft-enforcement in December and a hard-enforcement in April.

Think you might enjoy the video version of this blog more? Click here to check it out!

Well, it’s happening again, but this time the new regulation isn’t getting a lot of media coverage. Here’s the low-down. Last year’s ELD-rule didn’t come with a bunch of exemptions, but there was a pretty big one. The Automatic Onboard Recording Devices (AOBRD) exemption allowed carriers already using AOBRDs a grace period to convert to ELDs. And the final conversion date–December 16, 2019–is quickly approaching.

This change shouldn’t shock the system the same way the ELD-rule did, but as the saying goes, change isn’t easy–ever. I believe we’ll see some capacity drop from the market as the change occurs, but it could have less impact. Whatever happens, shippers should be aware that their supply chains could be affected, and this requires strong relationships with people who understand and can predict the shifts.

Often new regulations are impacted by enforcement or conversely, the lack of enforcement. There aren’t always enough resources to enforce new regulations with so many carriers on the road. This is illustrated each year during the CVSA’s International Roadcheck–June 4-6 this year. Historically, during this yearly inspection capacity tightens in many areas with the tightest capacity in states known for tougher regulation enforcement.

Lots of carriers choose not to run, or at the very least to limit some of their runs, during the inspection week. You see where we’re going with this. They aren’t worried about getting caught during times of normal operations because they know enforcement is loose.

We’ve heard lots of stories about carriers’ creativity in circumventing the ELD rule, from editing screenshots to running fake devices. Sure, some of these stories might be exaggerated, but where there’s smoke, there’s usually fire. Right. The truth is when people are faced with what they believe are onerous rules, they find ways to avoid them. Eventually, everyone will get on board with ELDs, but it’s going to happen over time, so the disruption will definitely continue.

And even if the final AOBRD conversion date doesn’t cause major shake-up in capacity, there’s another regulation in the pike, and it has a lot of potential to tighten capacity. The Federal Motor Carrier Safety Administration (FMCSA) passed a Drug and Alcohol Clearinghouse Rule that has a mandatory compliance date of January 2020.

This new rule encompasses a lot, but simply put, it establishes a national database comprised of the drug and alcohol test results of CDL drivers. In effect, the drug and alcohol test results maintained in the Clearinghouse “will enable employers to identify drivers who commit a drug or alcohol program violation while working for one employer, but who fail to subsequently inform another employer (as required by current regulations). Records of drug and alcohol program violations will remain in the Clearinghouse for five years, or until the driver has completed the return-to-duty process, whichever is later.”¹

No one knows how many drivers this may eliminate from the industry, but it’s bound to have an impact. And because it will take some time for the database to build, as no results before the January 6, 2020 date will be included, the impact on capacity will be gradual and possibly longer lasting than the impact felt by the ELD-rule.

Those of us affected by these regulations can’t control them, but it is imperative that we be proactive in learning about, understanding, and discussing with our partners the potential impact. As always, we believe strong logistics partnerships are essential for shippers to weather the ups and downs of capacity. It’s easy to forget how much the driver shortage, a few storms, and the ELD-rule put a crunch on trucks in 2018.

Ignoring the new regulations on the horizon isn’t an option. Cultivating and creating strong partnerships is a must. With understanding, study, and a healthy dose of predictive analysis, we can meet this new round of regulations better prepared than ever to help our customers navigate the volatile landscape of transportation.