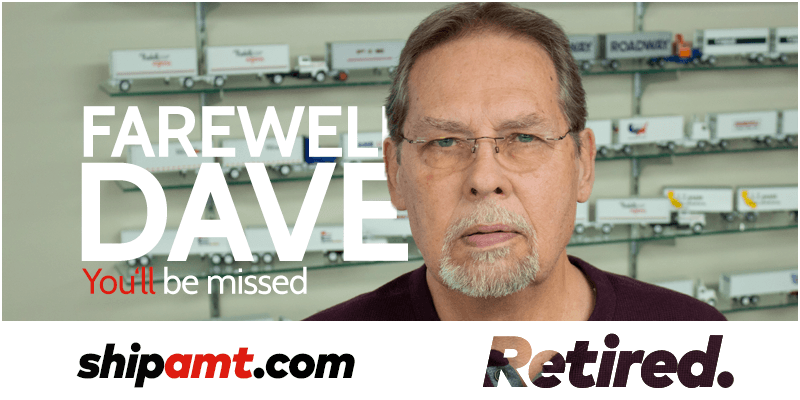 Last week, Dave Marquart, who began at AM Transport a whopping 26 years ago, retired. When Dave began his long tenure at AMT, we had three desks in an old cabin on Vernor Lake in Olney, Illinois. Since then we’ve moved into different locations and built on to our current location, but one thing that’s remained the same has been the early arrival to the office of Dave who’s usually in the building by 5:30.

We’ll miss his wry sense of humor, his work ethic, and his take-no-prisoners blunt honesty.

Jimi Fehrenbacher who has worked closely with Dave for the past 13 years says it didn’t take long for him to realize that Dave didn’t take much guff. “We used to work some regular loads from Bowling Green, KY to Florida with this certain carrier,” Jimi remembered, “and one day Dave and their guy got into it, until their guy said to Dave, Do you want me to come up there and kick your ass? I learned real quick that Dave was a man not to be messed with when he replied, “Do you want directions?”

When you’ve been in the business as long as Dave has, you’ve witnessed enormous changes too. Michael remembers the earlier days when AM Transport consisted of Dave, Eric Jensen, Avery McKinney, and himself. “I remember the days when tracking trucks meant going down to the Red Rooster truck stop to see if the trucks we had coming into Olney to deliver had arrived in town and would hit their delivery appointments. These were team driver loads from the West Coast that had to deliver at 7:00 AM on Monday morning. Dave, Eric, and I would go to the Rooster at 6:00 AM to see if we saw the trucks waiting to head over to delivery. We’d even occasionally knock on a door to get drivers and make sure they headed over. Talk about track and trace. We did this multiple times,” he laughed. “Of course, this was before cell phones.”

Bridgett Jensen remembers the weekend Dave and family moved to town. “Dave is a family guy, first and foremost,” she said. “When Dave and his wife Dorothy moved to town, their adult kids came along to help them get settled, and a few of them settled here themselves. We ended up with a pretty good backyard party that first weekend with the Marquarts, until their dog ran off!”

David Abell will miss Dave’s good advice, “My favorite Dave story is that he has a “guy” for everything, and over the years he has shared those guys–a tire guy, a cabinet guy, etc…  Whenever I worried or talked about life’s challenges, Dave was always quick to give practical advice. I felt he gave me the same advice that he would follow.  It was super helpful!”

Rob McClain laughs when he remembers his own beginning at AM Transport. He didn’t know Dave at all, and was a little intimidated by Dave’s brusque manner. “Let’s just say he softened up over the years,” Rob said. “He was super successful, and in my honest opinion, it was because he was relentless and always asked more questions than the next guy.  He really pushed for information, so that he could truly understand what they were wanting….whether on the customer side or with the carriers. He would take the extra time to learn why the trucks were late, where they were, so he could better understand what he needed to do to help. He would ask our customers what they wanted to accomplish vs just moving a load for them.  He learned about their business and it helped him develop some really long-standing relationships. In Dave’s eyes…you could never ask enough questions.”

Erik Jensen will miss Dave’s voice. “I really enjoyed listening to Dave talk to carriers.” Erik said, “He was great at developing relationships that generally turned into genuine friendships. Just a week ago, I was talking to a carrier that asked me if I worked with Dave. I said yes. He went on to explain that he hadn’t talked to Dave for over 10 years, but still had fond memories of him and wanted me to tell him hello.”

And Jason Doris will miss those early mornings commentaries, “I’ve always enjoyed the early mornings. There are only a few of us here early in the morning.  Dave is always the most recognizable voice. It was usually a morning dose of local or national politics mixed in with the perspective of 70 years of life experience.”

Here at AM Transport, we will keep asking the right questions and building strong relationships, but we’ll sure miss Dave Marquart. Good luck Dave!!!