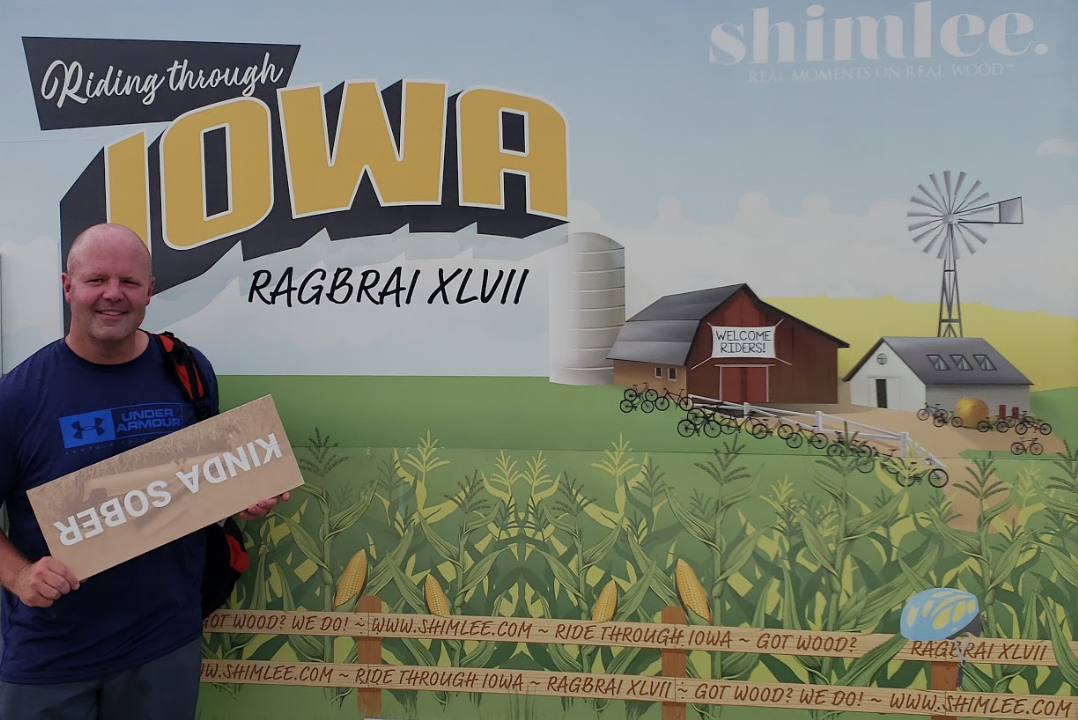 Have you ever taken a 500 mile bike ride? Most of us haven’t, but Rob McClain has–twice. This summer, Rob joined the nearly 8,500 riders for his second bike ride through Iowa. RAGBRAI (the Register’s Annual Great Bicycle Ride Across Iowa) which started with about 300 riders in 1973 is a biking tradition with cyclists converging on Iowa from every state in the US and all over the world. Each year, the riders take a different route across Iowa, riding through and camping out in small towns. This year’s event began Saturday, July 21 in Council Bluffs–taking riders through Atlantic, Winterset, Indianola, Centerville, Fairfield, and Burlington, before ending on the 27th in Keokuk.

“I rode 500 miles during RAGBRAI this year,” Rob said, “with Wednesday being the longest ride at 122 miles.” That 122 mile ride on Wednesday included an optional 37 mile loop. “Making that extra loop gave you the honor of completing a century ride. It was a great route around Rathbun Lake at Honey Creek Resort State Park,” Rob said. “It’s the farthest I’ve ever ridden in one day, so I was pretty tired when I finished. We were given a patch commemorating the 100-mile ride. And after a couple slices of pizza and a few beers back at the camp, I was pretty happy with the accomplishment.”

Rob attended this year’s event with Brandy McKinney who is married to AMT’s Michael McKinney. It was Brandy’s first time on RAGBRAI, and from all accounts she had a great time too. “It wasn’t as hot this year,” Rob said, “but Sunday we spent the entire day riding in the rain. My shoes were full of water.”

Rob McClain and Brandy McKinney having a well-deserved beer.

RAGBRAI is known for great food and beer at the stops. Rob’s favorite stop this year was Pete’s Pizza in Indianola. “The ride that day was a short one–only 41 miles on the bike,” Rob said adding, “Indianola was probably the best overnight town. We even got the chance to hear Big Head Todd and the Monsters, as well as, Sister Hazel.”

But what was his favorite food? 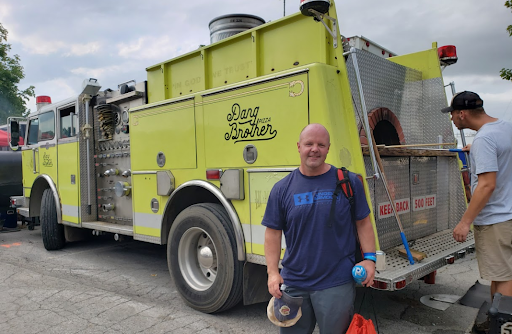 “The best beer I had was the King Sue, Double IPA from Toppling Goliath in Decorah, IA. It’s a hazy IPA that uses the Citra hope. It’s a little fruity and comes in at 7.8% ABV. Big taste with a big kick.” 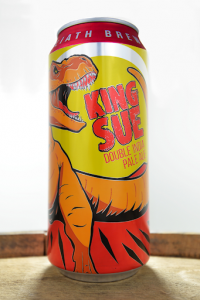 “I met a rickshaw driver from Denver Colorado. We shared stories for over an hour while we waited in line for pizza. We talked a lot about our home states and the marijuana laws. He explained how much the legalization of marijuana has helped the economy in Colorado with folks flying into Denver just to purchase weed.”

“Roadkill. Rather than remove roadkill from the roadways, the RAGBRAI folks put up a warning sign about a 1/4 mile alerting you to the upcoming hazard. It’s sort of a tradition, but lots of riders take the opportunity to adorn the roadkill with beads, beer cans or any other decor they might have on them.” 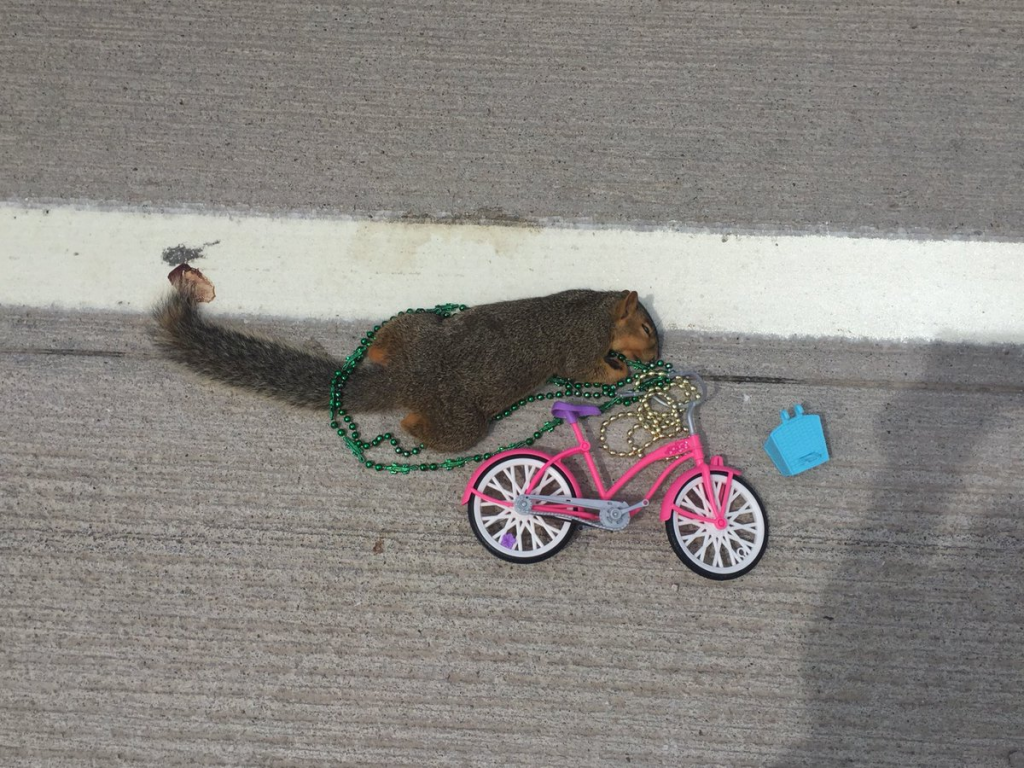 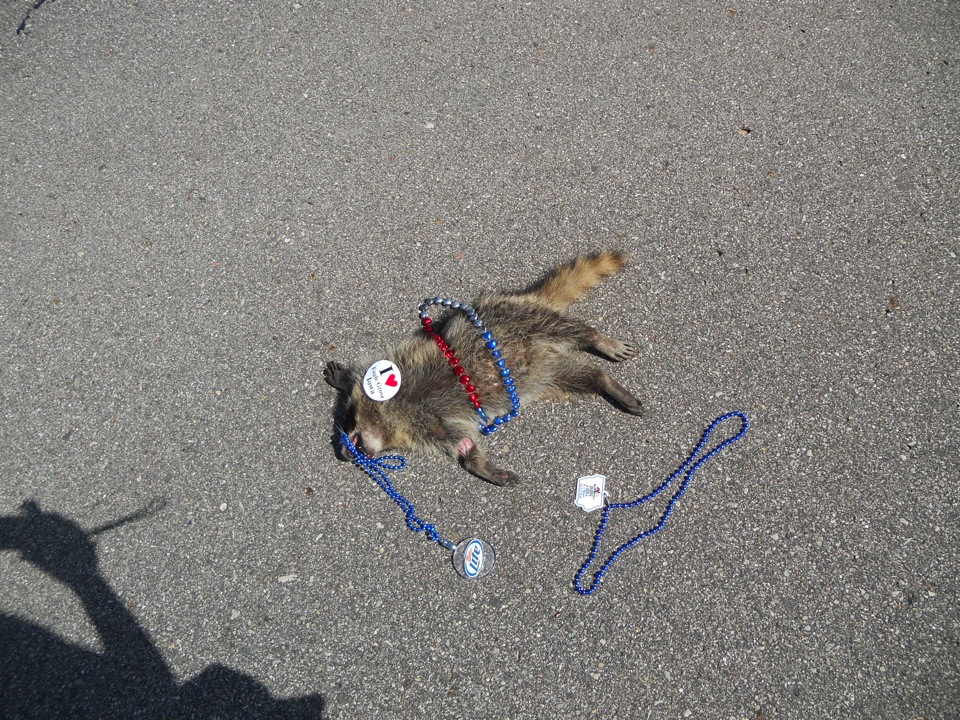 “I was a lot more comfortable on the ride this year. Having an idea of what to expect on my second go around allowed me to enjoy the ride more even though it was a longer ride with more elevation. I was stronger this year and able to recover more quickly. That probably had something to do with how great our campsites were. Brandy and I used Brancel Bicycle Charters this year, and they were fantastic. They always greeted us with a smile and happily took care of any request we had. They ran a great camp with plenty of porta-potties, refreshments, and entertainment.” 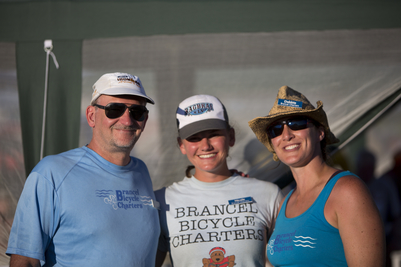 The Folks from Brancel Bicycle Charters

Will He Do It Again?

“Yes. My dad was a long time bike rider, and I intend to keep riding RAGBRAI until my wife and kids can come along–at least for a day ride. Maybe it’ll become a family tradition!”