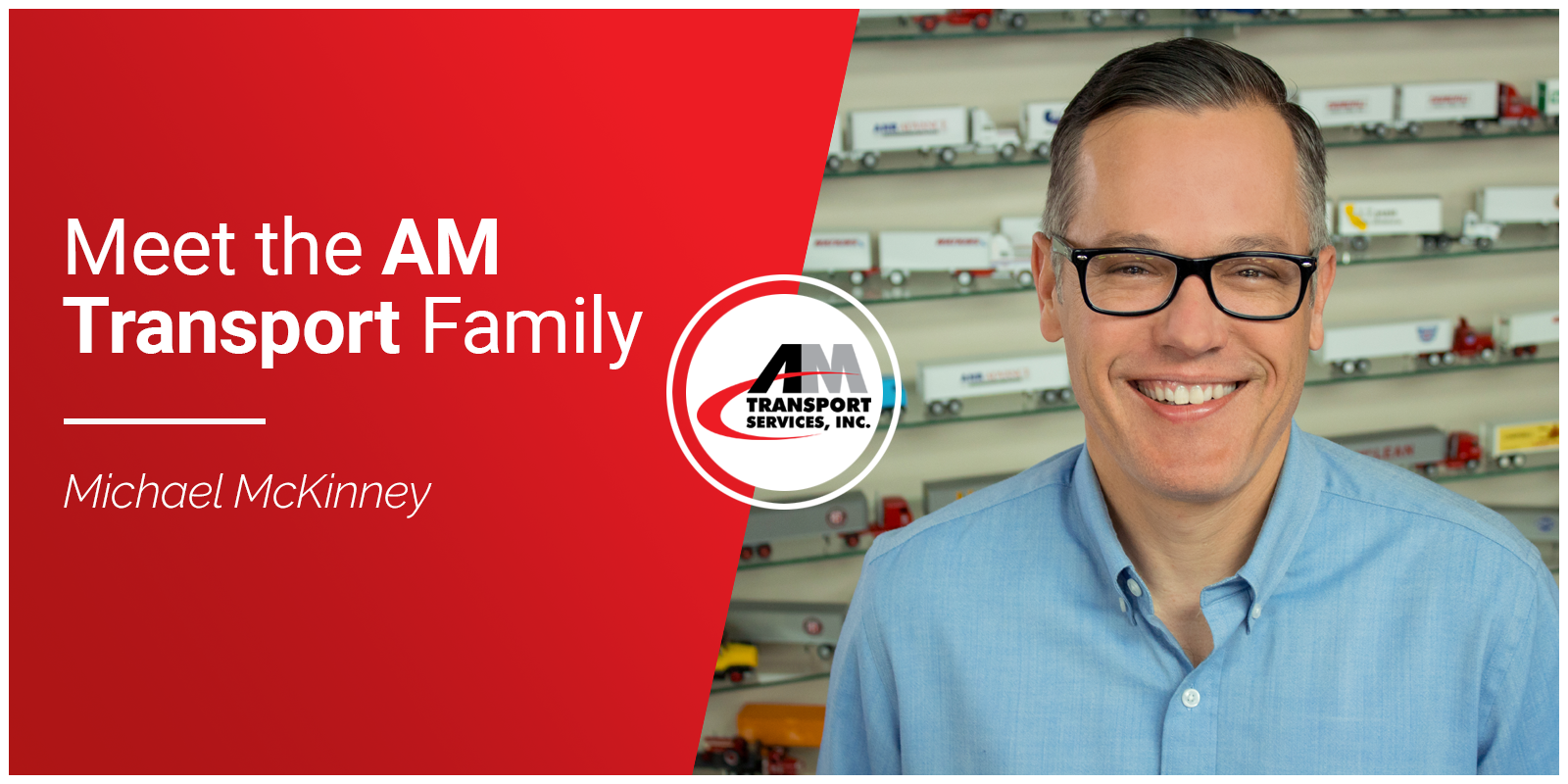 AM Transport has been helping manufacturers and distributors with their logistics needs for 30 years. And Michael McKinney, the CEO, has been with AMT for 25 of those years. He explains how he got into the family business, “I was working for a big tire company as a salesperson out in South Carolina and soon heading to Boston. I was talking to my dad on the phone, and he mentioned that he needed to hire a salesperson. I hung up the phone and started thinking about how cool it would be to work with my dad to grow the family company. I called him back and said I’d like to interview for the job. He was excited, but told me to think it over hard. He didn’t want me coming back unless I was really sure. I gave it a few days, but the feeling got stronger and stronger until I was sure it was the right thing to do. A few weeks later, I was knocking on the doors of any building that had a loading dock.”

25 years and a lot of changes later, Michael is still here and this week, he agreed (a bit reluctantly) to answer our Meet the Team questions.

Music: It’s kind of tough for me to narrow down my favorite music, but I definitely have some go-to’s. I used to keep up on new artists and leaned towards indie rock. But as I get older, I find myself recycling more of what I like and trying to occasionally learn something new by listening to NPR’s All Songs Considered. My favorites include: Radiohead, Band of Horses, Neil Young, Neutral Milk Hotel, and The Replacements.

Performer: Has to be Father John Misty. He’s the consummate performer. People either really dig him or outright dislike him on stage. I’m on the diggin’ it side. Yeah, he’s full of himself, but he lives up to it. A close second is Band of Horses. Those guys just seem like they’re having a blast and can really bring it live.

Show: I’m rewatching Lost right now with my oldest daughter, Madeline. It was one of the first long-form series that has evolved into the binge-watching we have today. My wife and I are watching season 3 of Ozark which is good. It’s tough to beat Curb Your Enthusiasm. I don’t know of a show that makes me laugh out loud more often.

Podcast: If I only had one, I’d probably have to fall back on Tim Ferris. I love his format of deconstructing people who are tops in their respective fields. I’ve been introduced to so many great authors, business leaders, scientists, and artists through his show. I also really enjoy Sam Harris’s Making Sense, Malcolm Gladwell’s Revisionist History, and Dan Carlin’s Hardcore History. For fun I love a good episode of The Rewatchables.

Sports Team:  The St. Louis Cardinals. There were a few years where I watched football more, but as I get older I find myself gravitating back to baseball. It’s also still the best sport to go to live. It’s tough to beat a warm afternoon, sitting in the stands, watching a ballgame while enjoying an ice-cold beer.

Color: Navy blue. Yeah, I know it’s on the boring side.

Beer or Wine: Beer. To name a favorite is kind of tough although you can’t go wrong with a Bell’s Two Hearted Ale. Recently, I enjoyed Check 1,2 from Mikerphone Brewing and Cromulet from Transient Artisan Ales.

Skittles or M&Ms: M&Ms. I have to go with the chocolate option.

Power Ranger: No idea, so I’ll go with Blue.

What are you listening to when you’re alone in the car?

It depends on my state of mind. If it’s been a busy work week, I may try to decompress by simply listening to music while driving. A little Neil Young, Band of Horses, or Radiohead usually does the trick.

A grizzly bear or a wolf. I love the mountains–the quiet and solitude. I may lean more towards the wolf because the idea of sleeping all winter is a bit much. Sleep is important, but life’s too short to sleep months at a time.

Married to my best friend, Brandy, and we have three wonderful girls, Dorothy 12, Chloe 15, and Madeline 18.

Best Christmas gift you ever received?

Best Christmas gift ever . . . my daughter Chloe. She was born on December 19, 2004. All three of my girls are the best gifts ever; she just happened to be born very close to Christmas.

I have two older sisters, and we’ve always cherished scaring the hell out of each other by jumping out from behind doors, corners, etc. Recently, I was able to sneak into the back of my sister Bridgett’s car right before she got in. I sprung up from behind the back seat and, let’s say there was a bit of a scream followed by a lot of laughter. Don’t worry. I scared her in a parking lot with no cars nearby.

I’d have to quickly figure out the best way to return it to its natural habitat or a proper nature sanctuary. My girls are hardcore animal lovers, so I’d have no other choice.

Honestly, I don’t. There’s a gnome garden out near where my parents used to live which I found pretty funny. At one point, it looked like the keeper of the gnome garden had given up. It was kind of sad with the gnomes lying over and their little village falling apart. Thankfully, things turned around and the garden is once again being kept up. So come to think of it, I guess I kinda like garden gnomes.

Driving my wife and kids nuts with my weirdness. I can get pretty goofy at home and I am the recipient of lots of eye rolls accompanied by an underlying smirk. I’m talking anything from bad impersonations and bad dancing to ad-libbing lyrics to songs.

Jason Doris recently introduced me to the Logitech MX Vertical Mouse and Ergo K860 keyboard. I was skeptical at first, but now you’d have to pry them from my ergonomically correct fingers. I also love my journal. It’s low-tech pen and paper, but perfect for shedding ideas from brain to paper, unwinding twisting thoughts, and taking note of what I’m grateful for.

What are you currently reading and/or what do you recommend?

I just finished The Overstory by Richard Powers, and I really enjoyed and highly recommend it. Next on my list is Gates of Fire by Steven Pressfield.

Wow, this is tough. I’ve been given lots of great advice over the years from parents, mentors, friends, and colleagues. One piece of advice I’ve shared before is the advice I received from a friend who suggested that I not only spend time with my girls as a family, but also carve out regular one-on-one time with them.

Some other good ones:

The more you own, the more it owns you.

Not everything is an opportunity. Learn to say no.

Try meditating and commit to it for 30 days before giving up.