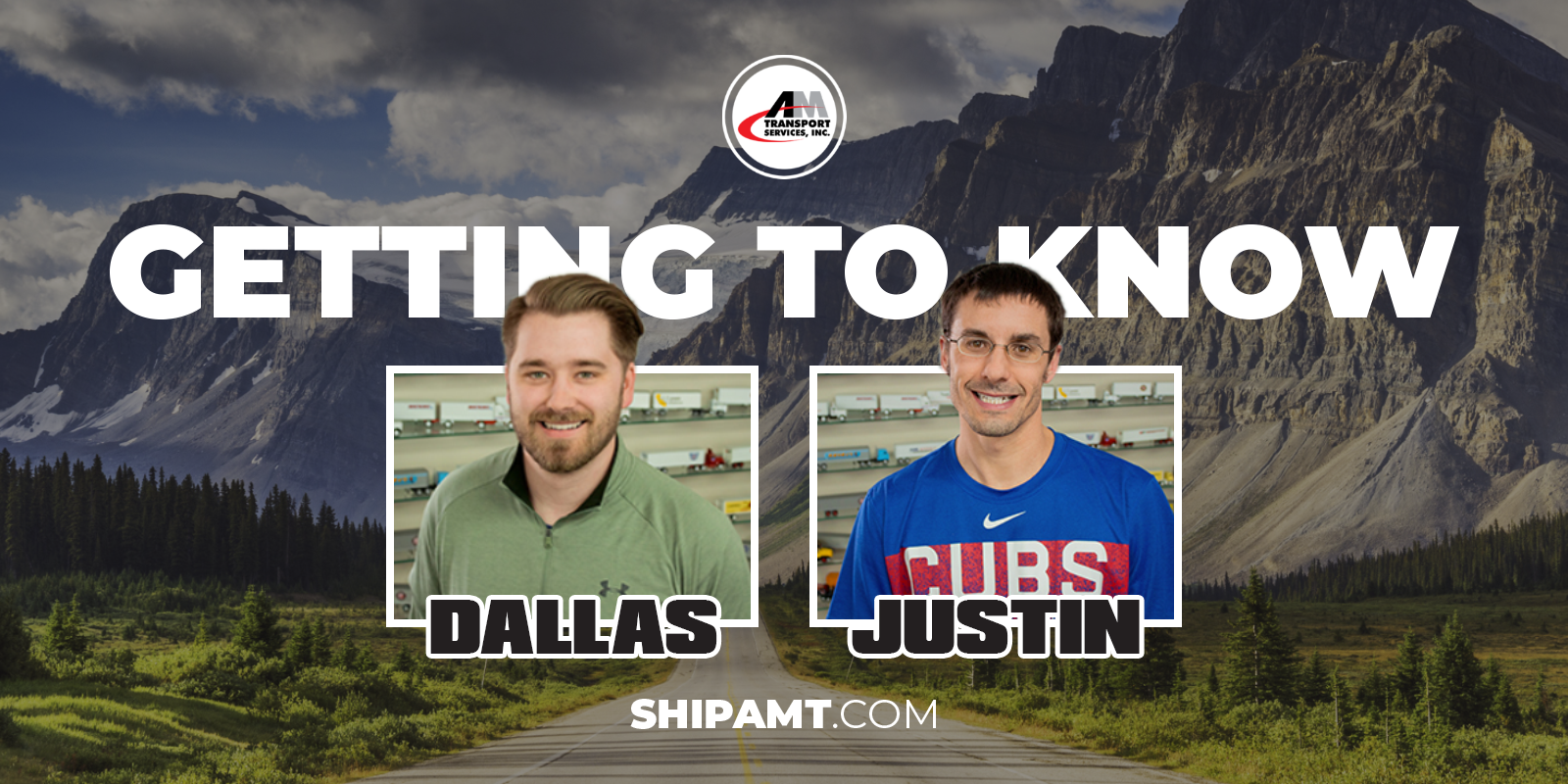 Getting to know Dallas and Justin

Dallas Racklin has been with AMT for nearly four years and started his logistics career in marketing with AMT Squirrel Works. Justin started seven years ago as a carrier manager. Dallas still works in marketing, but he’s also transitioned into an operational role since Squirrel Works was sold early in 2021. Justin started out as a carrier manager and remembers when we used “handsets instead of headsets.” He added, “we didn’t have group messaging and team chats or individual laptops.”

What else has changed?

Dallas: Nothing has drastically changed since I started. I began when technology was already making a bigger impact, and that has continued.

Justin: Transportation is a dynamic, ever-evolving industry, and you learn something new every day. Technology has changed a lot over the last few years within the AMT walls and has definitely made my job easier and more efficient in this fast-paced environment.

Do you have a favorite funny/story or memory about working at AMT?

Justin: Getting a visit from Santa Claus every year is definitely a memorable experience. You never know what Santa is going to say!

Tell us a little about your family.

Dallas: I have two sisters who are older than I am, and they each have one daughter.

Justin: My wife, Ashlee, and I have two kids–a son, Masen, who is 7 and our infant daughter, Addison, who was born March 20. In our house, we root for the Chicago Cubs, the Chicago Bears, and the Illinois Fighting Illini.

Dallas: More of a morning person. I am usually asleep by 9 or 10. No reason, in particular. I’ve just always been that way.

Justin: I am a morning person. I wake up between 5:15-5:30 during the week, take a shower, drink a cup of coffee (or pot of coffee if it’s a Monday) and watch 15-20 minutes of TV before heading to the office. That’s my morning routine.

Dallas: Anything with beer involved, but probably the annual golf outing.

Justin: The AMT Christmas Party is always a blast and we’ll have to celebrate twice as much this year after not having it in 2020. We always have a great time as a group, and it’s a fun way to unwind and celebrate the work year. It’s the one time each year that I actually bust out the dance moves!

Dallas: Fall is my favorite season due to all of the sports going on and the weather being perfect for sitting around the fire pit.

Justin: I would have to say spring. For me, it’s the anticipation of March Madness, when a bunch of buddies and I gather each year to watch the NCAA Tournament. I also enjoy spring-time thunderstorms, warmer weather, and the smell and look of fresh-cut grass.

How about favorite food?

Dallas: It’s a tie between pizza and burgers just because they’re delicious. Hard to beat a pizza from Joe’s or a burger from Chilly Willy’s.

Justin: Pizza. I could eat it every day!

Dallas: Going to Tampa Bay Rays fan days before the season and trying to rob a home run ball that my mom would toss up to me. Like I could actually get to the top of the wall . . .

Justin: This time of year reminds me of all the nights I spent at the ballpark, either playing Little Leage baseball or just hanging out with my friends. Masen is enjoying those experiences now, and it brings back a lot of good memories for me.

What’s the best book you’ve read in the past 12 months?

Dallas: It’s All In Your Head by Russ. He is a musician I follow, and when he released the book, I figured I’d take a stab at reading it. I highly recommend.

Justin: Wrigley Field: The Long Life and Contentious Times of the Friendly Confines by Stuart Shea.

Dallas: Dogs all day. I have 2 dogs. A yellow lab named Brody and a healer mix named Hope.

Justin: Cats. We have two–Friday and Pippa.

What’s your favorite dish to take to a potluck?

Dallas: Meat platter from Walmart because I suck at cooking.

Justin: Buffalo chicken dip always seems to be a hit.

With summer on the horizon, what’s your favorite summer activity?

Dallas: I like to get out and golf as much as possible. My friends are finally getting interested in it, so it makes it more fun to go play.

Justin: I enjoy going to the races at Tri-State Speedway in Haubstadt, Indiana, and we also enjoy spending weekends at the lake, boating, fishing, and having cookouts with our tight-knit group of friends. Last year, we went to Jellystone Park in Bloomington, Indiana, twice, and it was so much fun. We look forward to going back.

The pandemic has really slowed things down. As we are moving out of it, what are you looking forward to resuming?

Dallas: Concerts. I really miss going to concerts during the summer.

Justin: Large family gatherings. It’s been over a year since we had one. Christmas and Thanksgiving weren’t the same in 2020.

If you could offer your 12-year-old self some advice, what would it be?

Dallas: Cash out the bonds Grandpa bought you and put it all in Amazon.

Justin: Listen to your parents. They actually do know what they’re talking about.