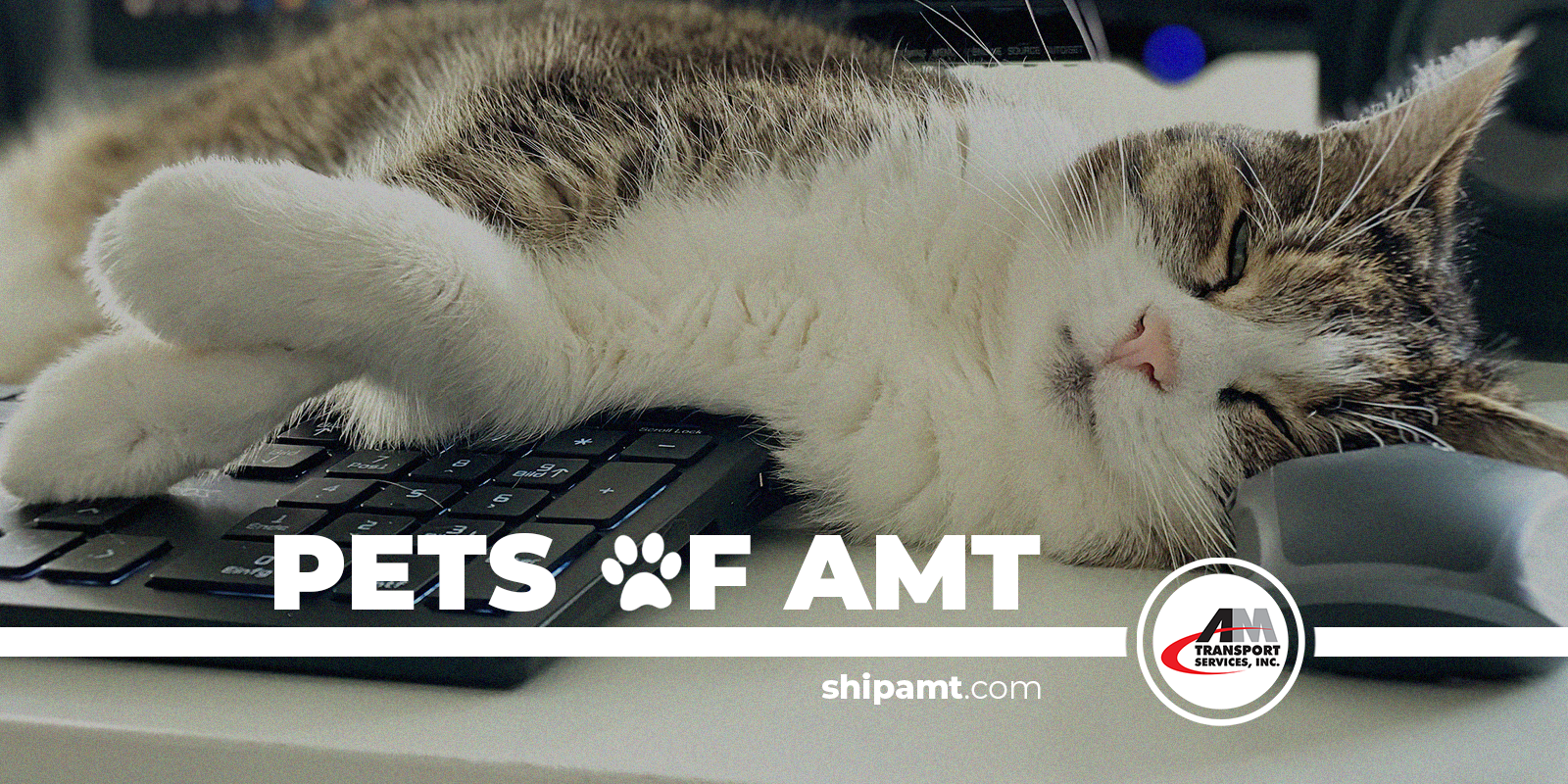 The Pets of AM Transport

Are you a dog lover? A cat lover? Maybe you have snakes, fish, or iguanas? Or maybe you love small fur babies like gerbils, hamsters, and guinea pigs?Whatever your pet of choice, we all know the joy, love, and happiness pets bring to our lives. But did you also realize pets are actually good for your health?

It’s true. According to the Centers for Disease Control and Prevention (CDC) the bonds between people and their pets confer benefits to people that include lower blood pressure and cholesterol levels, fewer feelings of loneliness and anxiety, and decreased symptoms of PTSD. At the same time, having a pet companion offers people increased opportunities to exercise outdoors while strengthening cognitive function in older adults.

But pets aren’t just good for us adults. They are good for children too.

Did you know that living with a dog or cat can boost immune systems of children in their first year of life, making them less prone to respiratory infections? And pets promote psychological development in kids too, contributing to their sense of compassion and responsibility.

The pets we love.

The folks at AMT are, by and large, a group of pet lovers, and we thought it would be fun to introduce you to our pet families. So here are a few cute pet pictures and descriptions of our favorite pets.

We currently have two dogs. Walter is a 15 lb. purebred German Shepherd currently 10 weeks old. We’ve had him for 5 weeks. We also have Milo who is a 3 lb. purebred Yorkie. He is going to be 3-years-old in September, and we’ve had him for two years. Walter likes to think he runs the house, but it is MIlo who holds the keys to the kingdom despite the major size differences that are only going to increase as Walter gets older.

We have Baxter. She is a four-year-old girl who likes to go for walks and car rides. She enjoys chasing animals, especially birds, cats, rabbits, and squirrels. She loves peanut butter, ice cream, and French fries. Her favorite toy is a chew bone.

We have two pets at home. We have had Sugar for about eight years. She was a rescue dog, so we don’t know her exact age, but we think she’s about 11-years-old. We also have Hipster, aka Hippy Cat. She is a stray who showed up at our house and never left. We have no idea how old she is.

We have two pugs and a cat. Our pugs are Oranges and Fiasco. We rescued them about 12 years ago from a southern Illinois poet who rescues pugs in her spare time. Our cat’s name is Josie. She’s been in our family for too many years to count. She was our daughter, Sydni’s, cat, but she stayed when Sydni moved out. She’s a great mouser.

My dog Petunia is an English Mastiff and she is 2-years-old.

We have one dog, Pablo. He is twelve-years-old, and my wife got him in 2011 from a friend, so she had him before we were married

We have a lot of pets. Zooey is a Weimaraner. She is 10-years-old and the best dog. Phoebe is a Great Dane. She is 4-years-old. She was a terrible puppy, but is finally starting to mature, a little. Linda is a cat. I’m not sure how old she is, but she likes to kill mice and moles. We have four more cats, Fat Tail, Pretty Kitty, and two kittens that aren’t named yet. And finally, we have chickens. We’ve had them for several years. They do not have names. We call them Chickens . . .

We have two dogs and 3 cats in our family. Our newest dog is Moose and we got him in March of this year. He is half Great Pyrenees and half Golden doodle. He is the backyard protector of chickens, but he forgets his role and chases them sometimes too. Our inside dog is named Boomer, and he is a chocolate/silver Labradoodle. We have had Boomer for a little over 2 years now. He continues to believe he is a lap dog, even at his large size. I don’t have any current pics of our cats, but they are all farm cats we’ve acquired over the past two years. We have two males, Wall-E and Pickle Loaf (yes, he is named after a lunchmeat), and we have a female cat named Reya. They’re all spoiled rotten by our daughter, Delaney, who is the only cat person in our household.

So there you have it!