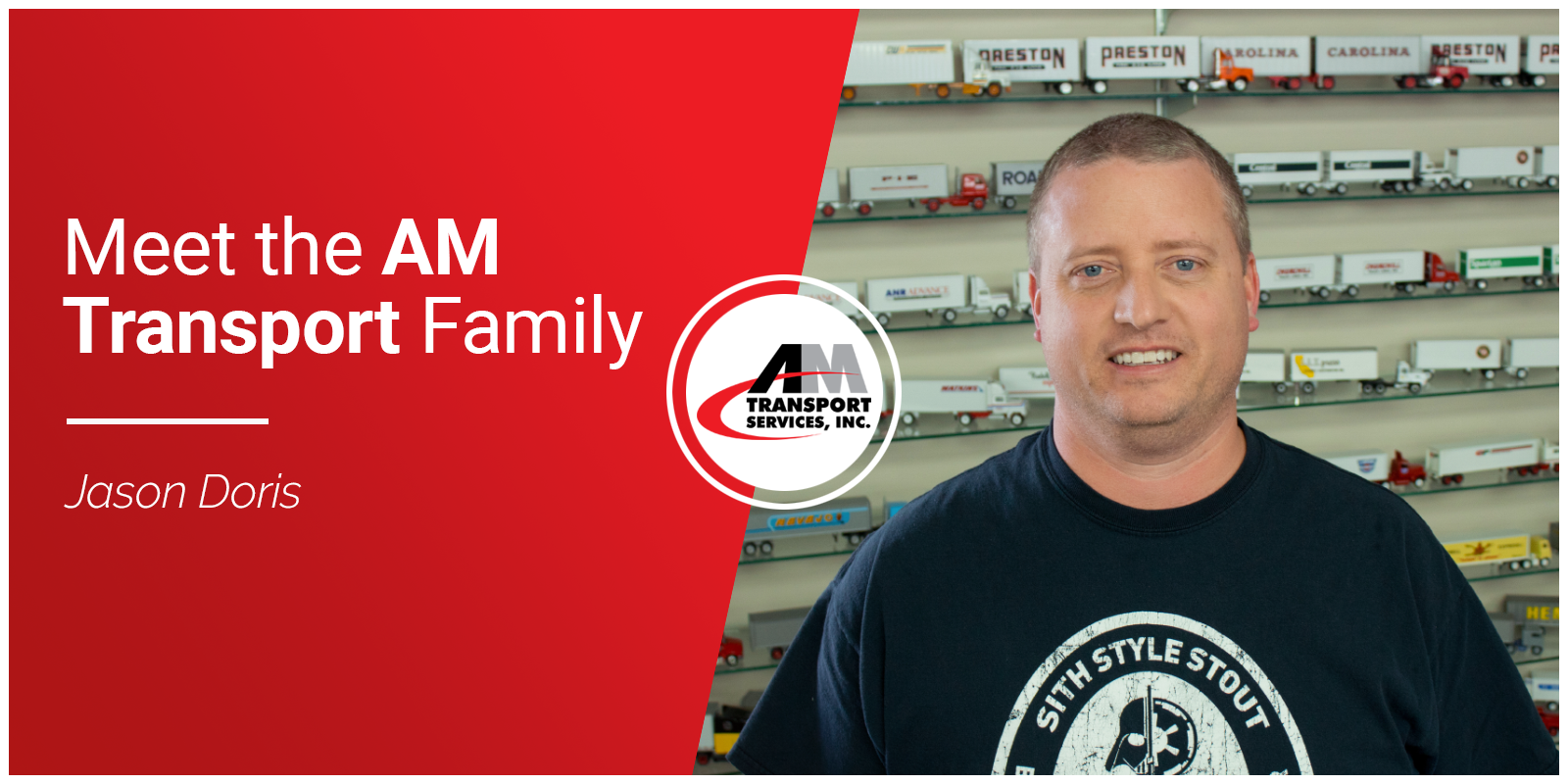 
Jason Doris is the Chief Technology Officer at AM Transport Services. He’s also the head grill chef. If he pulls up to your place with R2BQ our traveling grill, you are in for a treat! This week Jason took a few minutes out of his busy schedule to answer our “meet the team” questions.

Music: American/Outlaw Country/Red Dirt. The genre is pretty wide and there are a lot of good up-and-coming acts.

Show: Curse of Oak Island. They are going to find the truth!

Performer: This one is tough. From a music standpoint, I would say Sturgill Simpson in a small setting is right up there, but that is also true with Jamey Johnson. Another really great performer is Richard Johnston. It has been a long time since I’ve seen him play, but I don’t know anyone who saw him play and didn’t say “Wow!” afterwards. From a comedic standpoint, I had the opportunity to see George Carlin perform in a small Vegas theater. It was the best comedy show I have ever seen.

Podcast: I don’t have a specific podcast, but I like to listen to a few that cover technology, future theory, and challenge traditional business thought. Cal Fussman and James Altucher are a couple I listen to frequently.

Power Ranger: Blue or more specifically Chad Lee in Power Rangers Lightspeed Rescue. The actor, Michael Chaturantabut, was an up-and-coming martial artist when I was in the awards business that supplied the trophies and awards for the tournaments he was winning. He has several trophies that I dreamed up and put together. He was always level-headed and humble. He was also a very talented performer.

Skittles or M&Ms: Skittles without question. And their commercials are hilarious.

Beer or Wine and favorite: Beer. Wine can be good to flavor barrels that beer is then poured into to age and then drank. Favorite beer is a tough one. My favorite beer is the search for my favorite beer. I love craft breweries. It is interesting that some people refer to this as being a beer snob. When you think about this, it’s very confusing. Most people who really like craft beer try all sorts of different beers. Some great and some not so much. Those that make the beer snob comment often are loyal to one major beer manufacturer and won’t drink anything but that beer. So who’s the beer snob? My favorite go-to beer that I can get my hands on somewhat easily is Bell’s Hopslam. The best beer I have had so far is King Julius from Treehouse.

What do you think about when you are alone in the car? What music are you listening to?

Couple of different answers here. Even if I am in the car alone, my thoughts are typically determined by where I’m headed or what I’m headed to do. If I am headed to work or a meeting I’m thinking about what I could be doing better or what is happening in the industry. The voices in my head sometimes start arguing. I have been experimenting with voice recording some thoughts to follow up on during these times. On the other hand, if I’m headed to the store or to pick up one of the kids, I am repeating what my wife told me to do over and over so I don’t forget what I am supposed to get or do. Yes, I use lists, but almost every time something gets added via yell as I walk out the door. As far as music goes, I like turning on the radio to hear a DJ and just good ol’ fashioned radio with commercials and the whole nine yards.

I think a dog. Not sure what breed, but it would be one of the new breeds that some people spend thousands of dollars on, feed great food, and pamper more than a child. I’d lay around, be pampered, and never really have to worry about much.

I’ve been married for what will be 16 years in November if she doesn’t kick me to the curb before then. We have three kids, but if you asked my wife, she would say four including me. The oldest is Ainsley, a 13-year-old daughter. She is the perfect age to really be able to vocalize how tough life is and how Dad doesn’t know anything unless something is really needed to make something fun. Next are the 10-year-old twins, Hadley and Ian. If you need someone to chase around and keep you busy, then Hadley would love to visit. She can make your day in an instant with one of her stories or just a big hug. Ian is the resident artist. He has been very creative from a very young age. He is getting lured into video game and electronic addiction. There is always a challenge and that is why parenthood isn’t for everyone. It just isn’t a job you can quit.

July 1 will make it 7 years. I was unhappy with my current work situation and didn’t agree with the direction of the company. Michael reached out to me one day about meeting the next time I was in town. We met at a place I’m sure many great business conversations have occurred, Highbenders in Ste. Marie, around Christmas in 2012. We continued to discuss an opportunity, and by July, I made the jump.

What do you do at AMT?

I am the CTO and it’s my job to stay on top of technology and tools that give our kick-ass team what they need to keep kicking ass. I also provide technology strategy for what will give our team the edge for the future as well as create new opportunities for the company. When I’m not doing that I cook up some killer meats!

I could live without many things, but it would definitely make things harder. The ergo keyboard and mouse are a definite nice to have. The Sonos app to control some great tunes is a must. I prefer to use my iPad with the 2nd Gen Apple Pencil to take notes. I don’t think there is any other gadget or app that stands out, but the search for one is always a good time.

Best Christmas gift you’ve ever received or given?

I’m not sure about the best, but probably the most memorable is an old bolt action .22 rifle my great grandfather gave me. The best I ever gave was more about how I gave it. While dating my wife, I used to be very creative in my gift giving at Christmas. One year, I took an old Barbie and put a set of real diamond earrings in her ears. It took my girlfriend/now wife a while to see the earrings. At first she had a very confused look on her face.

What’s the funniest thing that’s happened to you lately?

Just last night. The family was all at a parking lot riding bikes and the kids were riding off a sidewalk and I was trying to convince them to try and jump off the sidewalk and to try riding a wheelie. They didn’t think they could, so I jumped on my daughter’s bike to show them how. After a few weak attempts I was able to get a small one, and had to stick at it. I ended up on my rear with the kids at first scared and then laughing.

Ride it to an Alabama football game.

A level of confidence that removes the fear of unknown situations. This is a big contributor to how I learn. Being in situations that you don’t have all the solutions for and having to figure it out is a great teacher. That is also why I am an asshole.

What are you currently reading, or what do you recommend?

I’m not currently reading anything other than some research on AI and machine learning technology. I am working to get myself up to speed on some technology pieces I am not that familiar with. No reading recommendations I can think of at the moment.

This is something I’m not very good at. A good, cold beer on a cool summer night with good friends is a good quick recharge.

A colleague from my previous job who’d been around a long time and had seen a lot of things but really loved his team gave me some good advice on staying married. Don’t ever go to bed mad at each other. I don’t know that I’ve always been able to stick to it, but I try and it is very good advice.