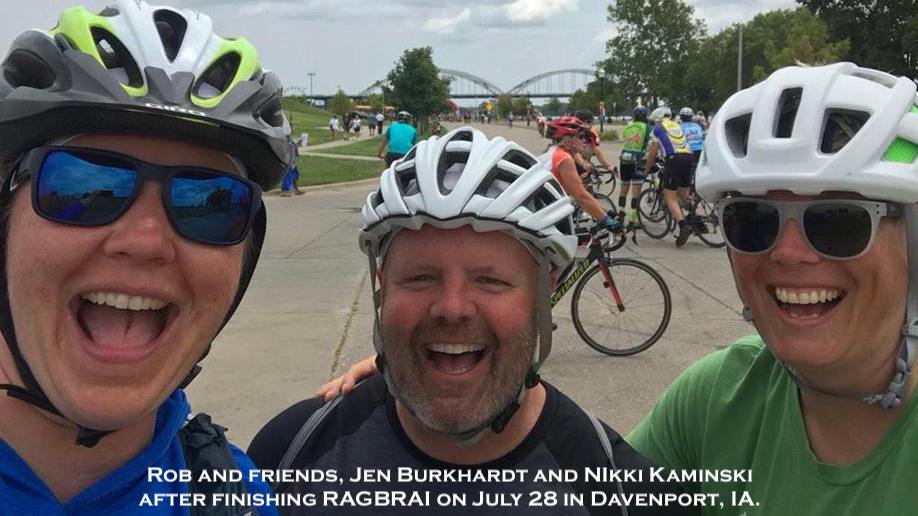 Back in 1973, two Des Moines Register columnists decided to make a six-day bicycle ride across Iowa. They invited a few friends along on the adventure, and the number swelled to 120 participants and RAGBRAI (The Register’s Annual Great Bicycle Ride Across Iowa) was born. Soon the number of participants rose to over 2000 and in 1985 hit 10,000 cyclists.

Held the last week in July of each year, RAGBRAI is the oldest, longest, and largest recreational bicycle ride in the world.  This year’s ride began on July 22 in Onawa, IA and ended on the 28th in Davenport, with participants traveling through many small Iowa cities, and camping out each night in campgrounds along the way. Beginning at 6AM each morning and off the road by 6PM each night, riders pedaled 45-70 miles a day. This year’s route totaled 428.1 miles and climbed 12,576 feet.

Who would want to do such a thing? Scramble out of a damp sleeping bag at the crack of dawn, wait in line for a porta potty, and ride a bike beneath the hot Iowa sun with 10,000 other people on bikes?

The answer is our very own, Rob McClain. Here at AMT, we’re proud and excited when team members try new things, take risks, and live to tell the tale!

Rob and I sat down for a couple of beers to talk about his bike ride across Iowa. I wanted to know what would compel a person to pedal a bicycle for hours at a time, day after day, beneath the hot July sun!

When Rob was five, his dad, who weighed well over 300 lbs, experienced a health crisis when he was diagnosed with Type 2 Diabetes.

“He completely changed his life,” Rob said. “He began bike riding at that point, lost 175 pounds, and got his diabetes under control. I don’t really remember a time when we didn’t ride bikes.”

Bike riding was something Rob and his dad did together. And living in a small town, biking became a way for young Rob and his friends to get around. During the summer months, they pedaled all over town from morning ‘til night.

So bikes were in his blood.

Rob’s dad died in 2001, but Rob continued the McClain bike riding tradition. “I don’t like to run,” Rob said, “but I love to ride my bike.” So much so that he often gets up at 4AM to tool around Olney before work. 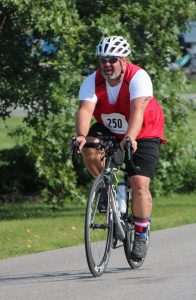 Rob competing in the White Squirrel Triathlon, in Olney, Illinois.

And while Rob is no stranger to competition (he’s participated in many long rides and races), there’s a big difference between riding a bike to work and riding your bike across Iowa.  So why RAGBRAI?

He’d always wanted to test his bike riding strength, Rob said. He wanted to push his limits, see what he could do. He’d planned other trips, but they’d just never worked out.

When he found out about RAGBRAI, he thought it would be a good fit.

RAGBRAI was more difficult than Rob imagined. “I didn’t like it at the beginning,” Rob admitted. “The camping was more challenging than I thought it would be. But by the third or fourth day, I realized I was enjoying it.”

So did he learn anything?

“I didn’t experience some sort of epiphany, if that’s what you mean,” Rob laughed. “I did learn to get up about 30 minutes before everyone else to avoid the super long porta potty lines, and that was a pretty big win.”

Maybe in a long-distance bicycle ride, the small things matter most. Rob wasn’t worried that he couldn’t complete it; however, he was surprised how subtly his discomfort morphed into a sense of accomplishment.

“I felt so good at the end of each day,” he said, “and to tell you the truth, I didn’t want to get off the bike at the end of the race. It’s cheesy, I know, but I cried when I crossed the finish line.” 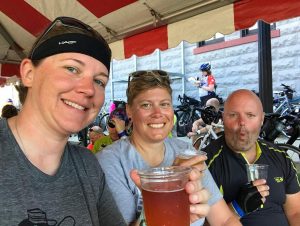 Rob and friends enjoying a cold beer after a long day of riding!

“I really enjoyed the Backpocket Brewing beer gardens spread out along the route.  But I’d have to say that the most exciting moment came as we finished our first day of riding and pulled into Denison, Iowa. We were greeted by a huge sign proclaiming BACON, It’s What We Smoke Here!  Volunteers handed you handfuls of bacon as we rolled into town. It tasted so good, I circled  around and got back in line.” 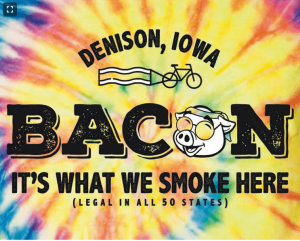 So would he do it again?

Absolutely. There were so many cool people on the trip. From teenagers to guys in their 80s, the riders were a pretty diverse group. And the folks along the way, in the small towns giving away waters, selling food, were so excited to show off their small towns and their hospitality. “It was really humbling to meet so many wonderful people and to visit their small towns,” Rob said.

“I’d really like to do this with my daughter, Nora, when she gets older,” Rob said. “She’s pretty tough. I know she could do it!” 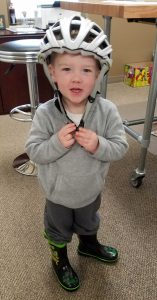 Looks like the McClain bike-riding tradition is in good hands!